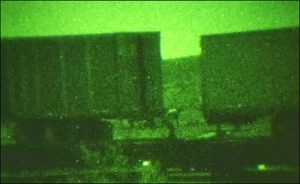 Cargo theft from a railroad yard near Los Angeles

Cargo theft may not be in the news, but it poses a real and rising threat to our country’s economy and national security. During the past five years, the groups involved in this crime have become better organized and more violent, and the price tag associated with the theft of cargo is increasing.

Scope of the Problem

Because cargo theft statistics have never, until recently, been a separate reportable category in the Uniform Crime Report (UCR) and because many companies don’t report cargo crimes (to avoid bad publicity, higher insurance rates, damage to reputation, embarrassment, etc.), the exact dollar losses aren’t known. Industry experts estimate all cargo thefts ring up as much as $30 billion in losses each year.

Cargo theft has many victims, from employees (i.e., drivers, warehouse workers) who can be hurt during an armed hijacking or robbery, retailers who lose merchandise, consumers who pay as much as 20 percent more to make up for theft losses, state and local governments who lose sales tax revenue, insurance companies, manufacturers, and shipping companies.

What’s being stolen? Any product being shipped is potentially a target, but cigarettes, pharmaceuticals, and computer/electronic components are current high-value favorites being re-sold on the black market.

Since the FBI’s jurisdiction doesn’t kick in until an interstate nexus is achieved, many of the cargo thefts in the U.S. are investigated by local law enforcement. But even when we get involved, we focus on criminal enterprises engaged in systemic or violent criminal acts. And if a case has an international nexus (as many do), we work with our legal attachés overseas, U.S. Immigration and Customs Enforcement, and our international partners.

One interesting fact about cargo crime: it’s usually a “gateway” crime. In many instances, a cargo theft investigation will turn into a case involving organized crime, public corruption, health care fraud, insurance fraud, drug trafficking, money laundering, or possibly even terrorism. Criminal groups use the illegal proceeds they gain from stealing cargo to fund their criminal operations. And the fear is that terrorists could use their proceeds to launch attacks or fund training.

And with the addition of the cargo theft category to the FBI’s Uniform Crime Reporting System, once police are fully trained to identify and report such crimes, we should have a much better picture of the overall cargo theft problem and will be able to use our resources more strategically.

Read the full article on fbi.gov.

The Quality of your Information Can Make or Break Your Business

Stand by Me: Bystander Intervention Comes to Corporate America

Who’s bugging you? What You Need To Know About Workplace Electronic Eavesdropping